Emmanuel Macron of his En Marche! party won handily in Sunday’s runoff election, defeating far-right Marine Le Pen (formerly of Front National) with a margin of 66% to 34%, among people who voted for either candidate. The number of abstentions, blank or null votes was also significant, making up around 33% of registered voters. (Read our interview on the abstention debate here.) 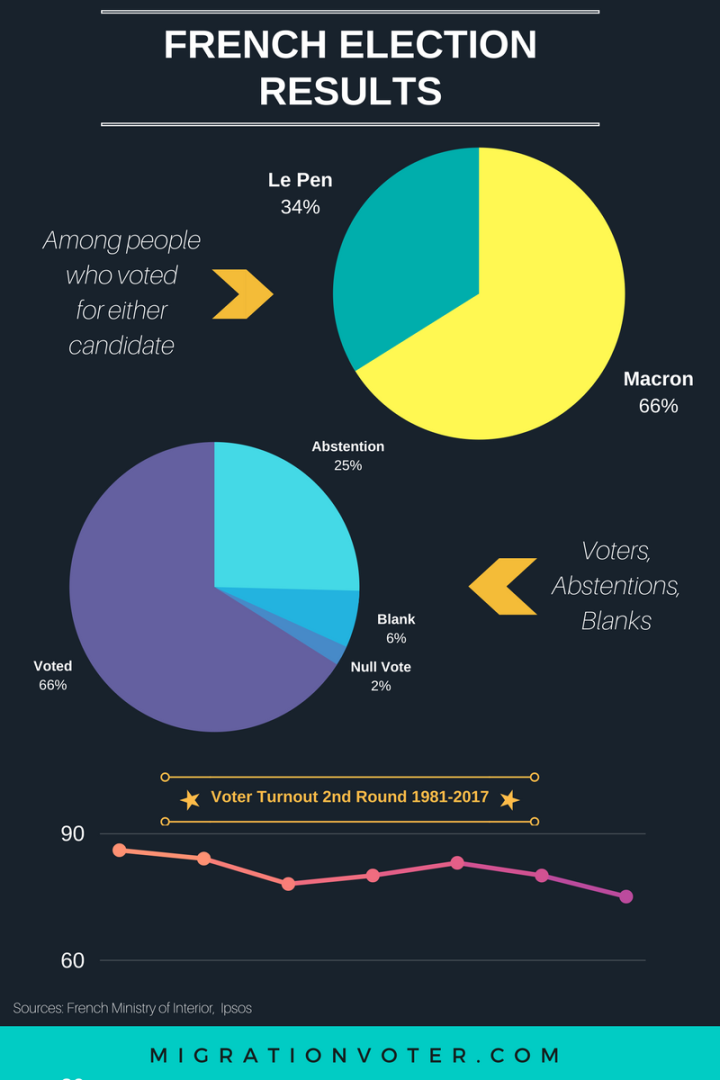 Within our previous analyses, we noted that Macron does not suggest many changes to the migration system, and did not campaign as heavily on the topic as his opponent. Now that Macron will be president of France, what should people interested in migration be watching for?

How will Macron draw people with high education or special skills to France?

In his campaign proposals on immigration, Macron promises to introduce new types of visas for professionals, scientists, and creators while streamlining existing procedures to make it easier for Masters students, artists, entrepreneurs and other highly qualified people to come to France. He even took to youtube to invite American scientists to immigrate to France to fight against climate change.

But will he have a legislature willing to extend working rights to people who immigrate for these purposes? Will they be amenable to creating new visas? And will any highly-skilled people already in the country but lacking a visa be able to apply for such benefits?

Will Macron move to detain all people seeking asylum?

Among Macron’s promises on immigration is the pledge to reduce the time for people seeking asylum to receive decisions on their applications (which also presumably reduces the time for deportations. ) He suggests that detention is the best way to speed up the process. As we explained previously, European law is pretty solidly against universal detention of people seeking asylum.

Detaining all people seeking asylum (including, presumably, children) so that their applications can be handled more quickly might infringe on international law, and Macron may be called upon to give a different justification for such a policy, or to restrict it to certain types of people (such as, e.g., people considered flight risks or threats to public security.)

It will be interesting to see if Macron comes up against European law on asylum detention if and when he attempts to reform the asylum system.

Will he face opposition from both the right and the left?

Finally, it is very much worth watching France in the run-up to their parliamentary elections in June to see whether the energy stirred up in this contentious election campaign dissipates or builds. On the right, Marine Le Pen’s base is no doubt gratified by her best result ever and a respectably solid number of supporters that has been growing in recent years. Many may have realized that there is a pool of abstainers as well as plenty of smaller parties on the right that could be potentially persuaded to join a broad-based movement based on opposition to immigration and national identity. Will Le Pen now be able to build a movement outside of the Front National and persuade voters across the right to build a unified and vocal opposition?

On the other side, many of the the 33% of people who abstained or voted blank or null are probably supporters of Jean-Luc Mélenchon and will present an additional layer of opposition to Macron’s centrist policies. With the traditional socialist party facing a historic defeat in the first round, and the far-left represented by Mélenchon’s Unsubmissive France coming off an election high, will there be space for the left to come together to oppose both Macron’s neo-liberal policies and the growing influence of the far-right? Will the mainstream socialists be absorbed by En Marche, or Unsubmissive France?

These questions will probably play out over the next few years, but we’ll get our first clues when France goes to the polls once again in June.

Results of the Second Round, Ipsos France (French)